What is flying around in our solar system?  There are at least billions of objects orbiting the sun in addition to the planets and their moons.  Asteroids, comets, and meteoroids are out there, but how much do we know about them?  What is the difference between them?  Did you know that meteoroids are called meteors when they collide with Earth’s atmosphere and meteorites when they hit Earth’s surface?

Continue reading to find free online resources about space for kids that are focused on asteroids, comets, and meteors:

What is much smaller than a planet but still orbits the sun?  It could be an asteroid!  Asteroids are rocky and small compared to planets, and many are found in the asteroid belt between Mars and Jupitor.  Find out more about these fascinating “planetoids” or “minor planets” by checking out these resources:

Asteroids and Comets
“Asteroids and comets are considered remnants from the giant cloud of gas and dust that condensed to create the sun, planets, and moons some 4.5 billion years ago.”  Learn about these remnants of our solar system’s history here.

Asteroid or Meteor: What’s the Difference?
The short answer is this: “An asteroid is a small rocky object that orbits the Sun. Asteroids are smaller than a planet, but they are larger than the pebble-size objects we call meteoroids. A meteor is what happens when a meteoroid – a small piece of an asteroid or comet – burns up upon entering Earth’s atmosphere, creating a streak of light in the sky.” Check out this web page for more detailed information!

ESO observations show first interstellar asteroid is like nothing seen before
“For the first time ever astronomers have studied an asteroid that has entered the Solar System from interstellar space.” The object was discovered in October 2017 and has been named Oumuamua.

Make Asteroids You Can Eat
“Create your own odd-shaped asteroids out of plain old mashed potatoes. Bake them in the oven to turn them (more or less) asteroid color. Then eat your asteroids for dinner!”

Make a Balloon-powered Nanorover
“Roving a mini-“planet” calls for a “mini-rover.” NASA built a tiny rover just a couple of inches high to explore the surface of an asteroid and take pictures. You can build a nanorover too. Try this one, made from three styrofoam meat trays.”

What Is an Asteroid?
“Asteroids are small, rocky objects that orbit the Sun. Although asteroids orbit the Sun like planets, they are much smaller than planets.” Learn all about these space rocks here.

Unlike asteroids, comets are made of ice and dust.  When they pass by the sun, they begin to release gases (outgassing).  This produces tails made of gas and dust, which point away from the sun.  Comets are fun to watch but also interesting to research.  Take a look at these resources:

Comets: Overview
“Comets are cosmic snowballs of frozen gases, rock and dust that orbit the Sun.” Find out the basics about comets here.

Deep Impact (EPOXI)
“The primary mission of NASA’s Deep Impact was to probe beneath the surface of a comet. The spacecraft delivered a special impactor into the path of Tempel 1 to reveal never before seen materials and provide clues about the internal composition and structure of a comet.”  Find out all about this important mission.

Find the Hidden Comet Words
Check out this word find puzzle about comets.

Make a Comet on a Stick!
“In this activity, you’ll make your own comet that can fly around the room!”  All you need are some chopsticks or a popsicle stick, metallic ribbons, scissors, and some tin foil.

Quest for a Comet!
Try operating the Rosetta as it gathers data from the 67P/Comet Churyumov-Gerasimenko comet.  Learn all about comets as you direct Rosetta to drop a lander, make observations, receive data, transmit data to Earth, and keep Rosetta from crashing. 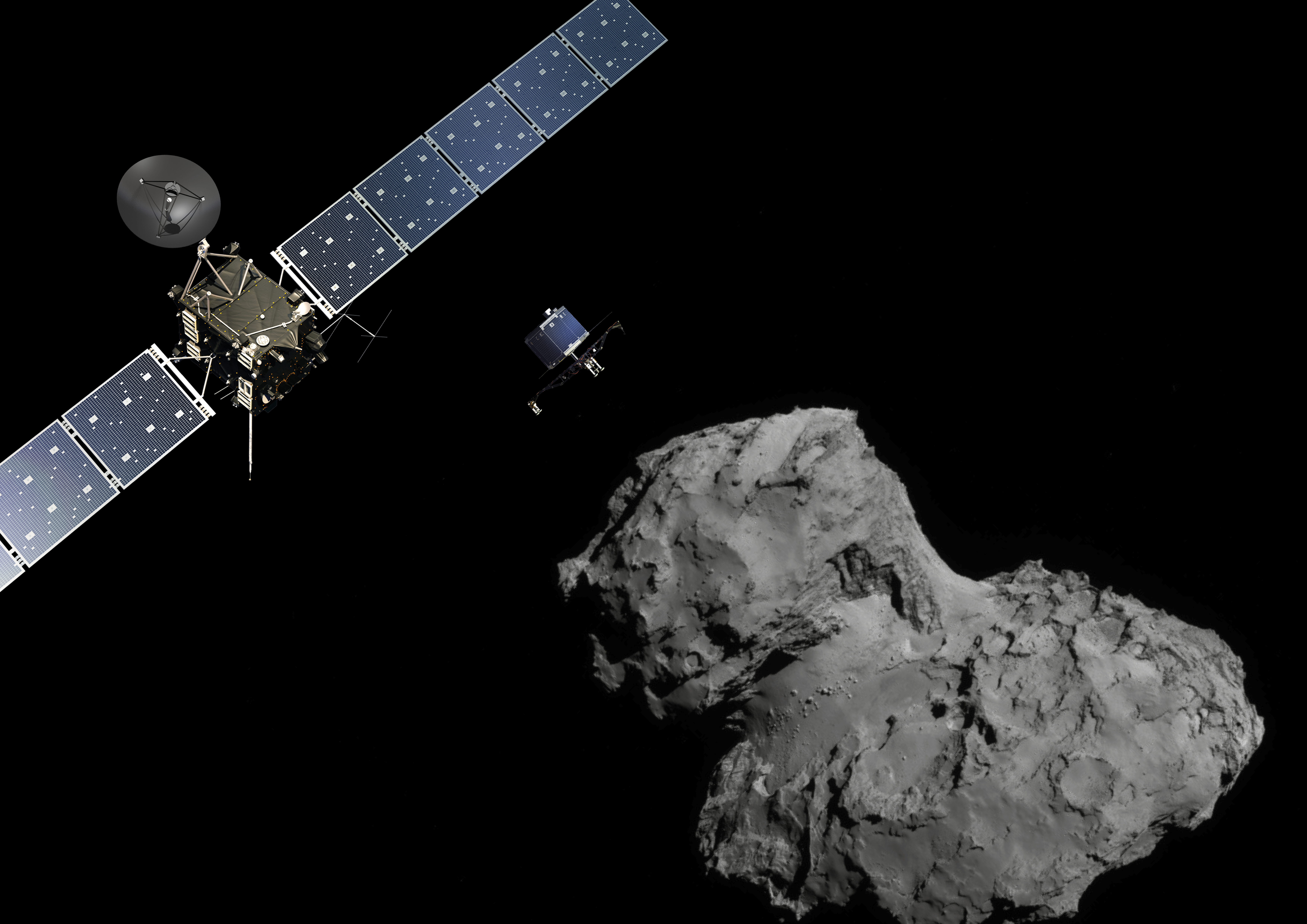 Rosetta photographs comet as it draws near.

Rosetta
Learn about the latest data received from the Rosetta as it studies Comet 67P/Churyumov-Gerasimenko.

Thirsty? Have a Comet!
Explore the big questions like these: What happened to the dinosaurs?  Where did the ocean come from?  Could comets be involved?

What’s in the Heart of a Comet?
“A comet’s nucleus is like a snowball made of ice. As the comet nears the Sun, the ice starts to melt off, along with particles of dust. These particles and gases make a cloud around the nucleus, called a coma.”  Learn more here.

Often called “shooting stars” or “falling stars,” meteors are really just meteoroids that have entered the Earth’s atmosphere and produced a bright streak of light in the sky upon entry.  When a bunch of meteors seem to “fall” from one point in the sky, a meteor shower occurs.  Great for wishing!  Find out more here:

Meteors & Meteorites: Overview
“What’s the difference between a meteor, meteoroid and meteorite? They’re all related to the flashes of light called “shooting stars” sometimes seen streaking across the sky. But we call the same object by different names, depending on where it is.”  Find out the basics about these space rocks.

Meteors & Meteorites: In Depth
Learn even more about meteor showers, how to find meteorites, and how meteorites have impacted history.

Meteoroids and the Craters They Make
“This activity investigates the formation of craters. You’ll see how the size, angle, and speed of a meteorite’s impact affects the properties of craters. In addition, your family will become familiar with the terms meteor, meteoroid, and meteorite.”

Meteors, Meteorites and Impacts
Learn about the history of meteorites, their composition, and the impacts they have left on the Earth.

Next Dates for Meteor Showers
“A meteor shower is a spike in the number of meteors or ‘shooting stars’ that streak through the night sky. Most meteor showers are spawned by comets. As a comet orbits the Sun it sheds an icy, dusty debris stream along its orbit. If Earth travels through this stream, we will see a meteor shower.”  Check here for the next peak dates for meteor showers and learn by watching the actual event!

What Is a Meteor Shower?
“If it’s time for a meteor shower, you won’t need a telescope, binoculars, or a high mountain to have a “star gazing” party. You might need a warm sleeping bag and an alarm clock to wake you in the middle of the night. But then just lying down in your own backyard will put you in the perfect spot to enjoy a great show.”  Find out more about this backyard display on this page.

Did you discover some other neat resources for learning about asteroids, comets, and meteoroids?  Share them in the comments below….