5 Women Making STEM History that Your Kids Should Know

*Sponsored by Girls Can Crate*

Every year we take time to learn about and celebrate women’s history month. Many great women in history have made a difference, and while we honor them all, it is essential to acknowledge that strong women are still making history today! So for this year, we are going to focus on 5 women currently making STEM history that your kids should know!

The first female spacewalk was credited to Svetlana Savitskaya in 1984, but the first all-female spacewalk credit was planned to go to the Astronauts Anne McClain and Christina Koch. Sadly, this spacewalk was canceled with NASA citing the lack of adequately fitting spacesuits. History was still made however with Astronaut Anne McCain becoming the 13th woman and Christina Koch becoming the 14th woman to spacewalk at the International Space Station.

The first all-female spacewalk was rescheduled and completed by NASA astronauts Christina Koch and Jessica Meir on Oct. 18, 2019. Watch it here!

Anne McClain grew up in Spokane, Washington. She earned a Bachelor of Science in Mechanical/Aeronautical Engineering from West Point. Anne was then commissioned as an Army officer and obtained a Master of Science in Aerospace Engineering from the University of Bath and a Master of Science in International Relations from the University of Bristol. As Senior Army Aviator, she has more than 2,000 flight hours in 20 different aircraft. Anne was accepted into the 21st NASA astronaut class in 2013.

Cynthia Breazeal is recognized as the pioneer of social robotics. She earned her Bachelor of Science in Electrical and Computer Engineering from the University of California, Master of Science at the MIT Artificial Intelligence Lab, and Doctor of Science in Electrical Engineering and Computer Science from the Massachusetts Institute of Technology. She is currently a Professor of Media Arts and Sciences and Director of the Personal Robots Group at the MIT Media Laboratory. 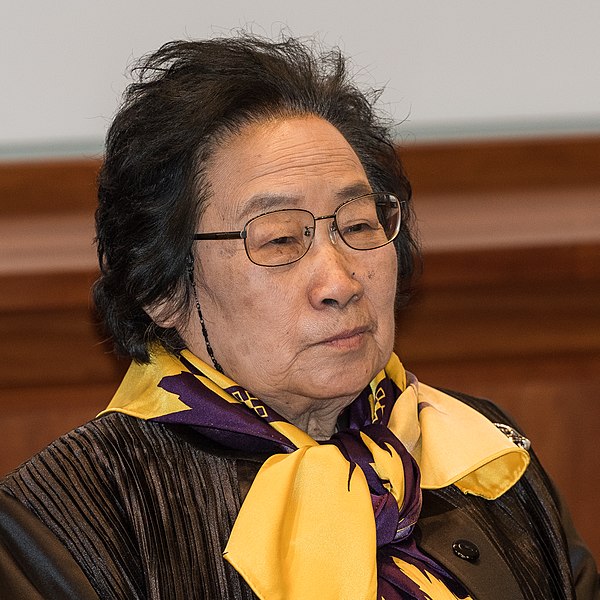 Tu Youyou was the first woman from China to receive a Nobel Prize. Tu was born in Ningbo, China in 1930. Inspired by her battle with tuberculosis at the age of sixteen, Tu decided to study medicine and earned a degree from Beijing Medical College. She then joined the China Academy of Chinese Medical Sciences. In 1967, Tu was appointed to lead Project 523. This project was to was to search for a malaria treatment among traditional Chinese medicines. In 2015, Tu received the Nobel Prize for her work in discovery the of artemisinin (a drug to treat malaria) saving millions of lives around the world. Tu continues to make history as the Chief Scientist in the Academy of Traditional Chinese Medical Sciences in Beijing.

Donna Strickland joined the historic women Marie Curie and Maria Goeppert-Mayer in 2018. She became the third woman winner of the Physic Nobel Prize. Donna’s work in developing Chirped Pulse Amplification is now helping in the medical field with laser targeted cancer therapy and laser eye surgeries. Donna is currently a professor in the Department of Physics and Astronomy at the University of Waterloo.

These historic women are not alone!

There are many women all over the world that are making their mark.

Encourage your daughter to become a strong woman in STEM with

GIRLS CAN! CRATE introduces girls ages 5-10 to real women who have changed the world. Every month, you get the story of a real fearless woman, a 24-page activity book filled with games and activities, and everything you will need to complete 2-3 hands-on STEAM (science, technology, engineering, arts, math) activities, and more! Check it out and see why homeschooling parents love this subscription box!