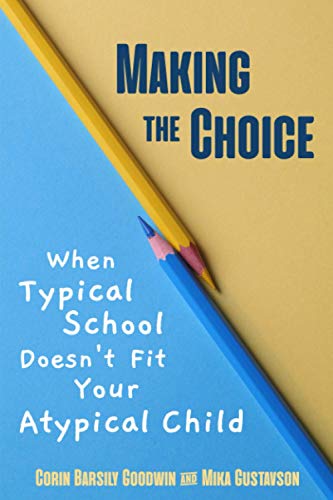 When Typical School Doesn’t Fit Your Atypical Child
by Corin Barsily Goodwin (Author), Mika Gustavson MFT (Author), Sarah J. Wilson (Editor)
Instead of trying to force your child to fit into school, perhaps it is time to consider finding educational options that fully address your child’s academic and emotional needs.

(An excerpt from Making the Choice: When Typical School Doesn’t Fit Your Atypical Child, by Corin Barsly Goodwin and Mika Gustavson, GHF Press) The term “gifted” is sometimes used to describe well-behaved, high-achieving students. No doubt these children are truly gifts to the harried teacher or administrator, but it is a mistake to apply that term only to children who fit a description of “well-behaved” and “high achieving.” We know that some gifted children misbehave, acting out their boredom and frustrations. Some are not academic achievers. Some have emotional challenges. Some have learning differences or learning disabilities along with their giftedness. This is hardly a uniform lot!

Attempts to understand giftedness have resulted in a wide variety of descriptions, each focused on a particular component. The brain researcher will take note of an individual’s neurological asynchronies, while the therapist may see a high level of sensitivity as a primary issue. The education professional working through a school district commonly uses as a guideline an intelligence test score above 130 (depending on the test), which is two standard deviations above the average IQ score of 100. Some programs that are ostensibly for gifted children search for the top 2-5% of the population as shown by various determinants, while others look for significantly advanced scholastic achievement (based on chronological expectations).

One description of giftedness is based on the child’s differences from the norm in ways that encompass more than intellectual ability alone:

Giftedness is asynchronous development in which advanced cognitive abilities and heightened intensity combine to create inner experiences and awareness that are qualitatively different from the norm. This asynchrony increases with higher intellectual capacity. The uniqueness of the gifted renders them particularly vulnerable and requires modifications in parenting, teaching and counseling in order for them to develop optimally.
—The Columbus Group, 1991 (emphasis added)

This takes into account the unique characteristics of the child and specifically highlights the necessity of charting an educational and parenting course that meets the needs of the individual child as they are. This is no easy thing, and naturally any parent would want more information before embarking on a different and less-traveled path.

Unfortunately, we live in a society in which the term different, especially when applied to children, is equated with “needs to be fixed.” Parents and teachers, in need of reassurance or simplification, evolve practices based on the theory that children develop at more or less the same rate and in the same way, based on books they have read or child development theories with which they are familiar. When a child does not respond as expected, the assumption is that something about the child needs to be corrected. It is a rare occurrence when others notice and understand that a particular child’s behavior is, in fact, quite normal—that is, normal for a gifted or 2e child—and that a gifted child does not always excel at everything, all the time. Instead of being identified as gifted and then appropriately educated, they may end up falling through the proverbial cracks.

Most gifted children have some asynchronies, or uneven areas, where they are more or less advanced than in other areas such as motor planning, decoding, auditory memory, eye-hand coordination, sequencing, or spatial awareness. Areas of weakness are not unusual in any child because children do not develop at a predetermined pace and in lockstep. In a gifted child, however, you may find that the uneven or asynchronous rate of development manifests in a variety of ways, not all of which are academic. Your darling little seven-year-old may have insights worthy of an adult, the attitude and eyeball rolling attributes of a teenager, and the hissy fits of a preschooler! This is a challenge for the adults doing their best to communicate with these unusual young people, but it makes sense when you think about it from the perspective of the 2e child. Consider having the knowledge to imagine a much more complex art project than you are physically capable of producing due to difficulties with eye-hand coordination, or being unable to follow directions due to auditory processing disorder—and as a result getting stuck with work of a much lower level of difficulty because no one, including yourself, realizes that you are capable of so much more. Gifted children often have an emotional adherence to truth and justice and a passion for same, but that does not mean that their perception of what is fair is the same as yours, because in life experience they are still only children.

These well-intentioned children may not only be out of their depth in experiences, they may also have difficulties in sequencing ideas or sorting through logic or summarizing or drawing appropriate conclusions. Or, they may have an expressive language disorder that prevents them from articulating their concerns in a constructive fashion. These children end up appearing stubborn, pushy, and possibly not very bright, as opposed to the gifted-but-challenged young people they truly are. Furthermore, exposure to concepts that are beyond their emotional development while they are fully capable of understanding the implications (such as war, homelessness, or even an adult argument) could result in emotional distress that children with some neurological disorders may be unable to process effectively, or which may cause stress that leads to an increase in manifestation of symptoms.

While these behaviors are all within the range of “normal” for a gifted child, some gifted children experience more extreme asynchrony, where the gap between their greatest areas of strength and their points of weakness are significant enough to fall into the category of serious learning problems or disabilities. These kids are still considered gifted, but because they have relative or functional learning or attention difficulties, they are what we call “twice exceptional,” or “2e.” They are gifted and also have a learning disability or deficit.

A child who is considered 2e can easily be misdiagnosed, because giftedness and learning differences often have overlapping symptoms. Frequently included among these conditions are ADD/ADHD, autistic spectrum disorders, auditory and visual processing disorders, or other emotional or mental disorders. Often, professionals misdiagnose children who are twice exceptional because they are unfamiliar with the various disorders, as well as with the concept of common co-morbidities and the myriad presentations of twice exceptionality. They may not know which questions to pose to parents, and the parents may not know which behaviors to describe to the professionals.

Because many of these conditions manifest similarly, it is critical to understand the root cause of these behaviors, whether it is due to a neurological condition or the child’s exhaustion in the face of continually pushing against her limitations. These children are often able to compensate for any weaknesses extraordinarily well for a period of time, and so long as they are performing academically at the assumed level of or ahead of their age peers, the possibility of a dual (or multiple) designation just is not considered. In some cases, the learning difficulties may mask the giftedness, while in other cases the giftedness masks the weaker, problem areas. This is why it’s not always easy to spot a child who is twice exceptional, particularly if he doesn’t want to be spotted.

Frequently, twice exceptional children are identified when parents seek assistance in understanding seemingly incomprehensible behaviors on the part of their child. For example, there could be neurological dysfunctions causing a child to take two hours to complete a 20-minute math assignment when the child clearly understands the material. There could also be emotional outbursts such as refusal to attend a favorite activity when a substitute teacher is leading the class.

A similar marker of possible twice exceptionality in a gifted child is the level of frustration the child faces. Many parents and teachers don’t understand why a child has a hard time with something that the adults don’t believe should be difficult. Despite behavioral clues from the child, they still don’t suggest assessment, in the hope that if the child would only try harder he will figure it out and be able to do it on his own. That’s a lot like expecting a paralyzed child to get her physical fitness in the same manner that all of the other children get theirs, in spite of the limitation on the individual child’s ability to perform in that manner. We have seen children whose learning disabilities are not discovered until their teen or even young adult years. These children could have been spared a lot of frustration, pain, and destruction of their self-esteem if the disability had been discovered and addressed or remediated sooner. In fact, many parents do not learn to identify and understand the implications of their own learning challenges until they start doing the research on their children, recognizing the similarities between the way their child presents symptoms and the way that they did as children—and often still do. One thing many 2e kids do for their parents is to offer a mirror to look into that may be helpful, or may cause resentment to those who prefer not to know.

Learning differences (LDs) are often called “invisible disabilities” because they are not obvious at first glance, leading adults to assume that the child is being lazy or stubborn. While some LDs can be overcome through sheer effort, the adults involved need to consider whether this is something the child can truly work through, or whether some kind of academic accommodation or professional assistance would be helpful. Is it fair or reasonable to ask a child to expend additional effort overcoming obstacles when there are minimally intrusive mitigating therapies that can be undertaken, many of which may be covered by standard medical insurance or even the local school district? And from the point of view of the child’s education, is it fair to keep a child struggling with an area he is not developmentally ready for at the expense of surging ahead in his area or areas of strength?

Being twice-exceptional poses major challenges for both the child and the significant adults in their lives. Failing to identify, or incompletely identifying, the special needs of these children makes the possibility of constructing an appropriate learning environment a much higher hurdle. Happily, with identification and intervention, a satisfying and successful educational experience is within reach.